16 hours ago
Keep making good friends in your own ‘piping times’
1 day ago
SPA Professionals go online / ‘Snapshots’ clarification / Up To The Line
2 days ago
NPC launches crowdfunder to digitise its magazines
3 days ago
Modern pipe band drumming
4 days ago
The history of the Argyllshire Gathering, part 8 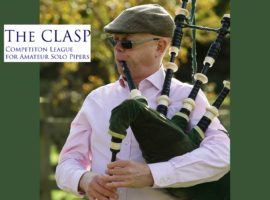 James Carnegie is the latest member of the Competition League for Amateur Solo Pipers (CLASP) to be profiled: • Where are you from and how did you get into piping?Edinburgh (although I now live in Cambridge). My uncle plays and from an early age I wanted to learn the pipes. […]

Donald ‘Duaghal’ MacKay was born in the old Tongue House in Sutherland, Scotland in 1591. His father, Uisdean was the 13th chief of the MacKays and Donald succeeded him as 14th chief on Uisdean’s death in 1614. Donald was knighted in 1616 and became 1st Lord Reay in 1628, the […]