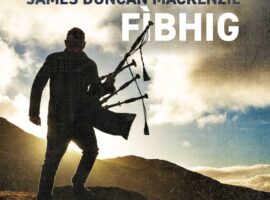 Well known Scottish piper, James Duncan Mackenzie has released his third solo ablum. Fìbhig (pronounced Fee-vik), an Old Norse word meaning ‘of a bay and hamlet,’ features 19 tunes and one song, all composed and recorded by Mackenzie from his home in Shawbost on the Hebridean island of Lewis. Other […]