4 hours ago
Memories of Andrew Pitkeathly / MacDougall Trophy found
1 day ago
A fresh start for pibroch inclusion
2 days ago
Piping societies in the modern era – Part 2, the RSPS
3 days ago
Piping in London – Part 8
4 days ago
Duncan Johnstone Memorial Piping Competition is on and in person 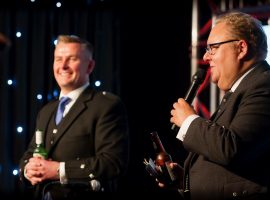 McCallum Bagpipes celebrated their 20th anniversary with a concert and ceilidh in the Park Hotel in Kilmarnock on October 20, 2018. There were 300 invited guests, and after they were welcomed by Kenny MacLeod and Stuart McCallum, they were treated to music from the Grade 1 Johnstone Pipe Band, folk-rock […]