5 hours ago
Playing the Highland pipes with other instruments – why B-flat and not A?
1 day ago
Piping results and photos from B.A.G winter competition
1 day ago
See Breabach tonight at CC23 and on USA tour starting Feb 2023
2 days ago
Enter the Northern Meeting 2023 competitions now!
2 days ago
See the Scott Wood Band tonight at Celtic Connections 2023 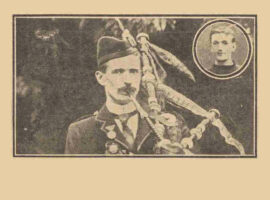 by JEANNIE CAMPBELL MBE. Donald MacKay, from Beauly (1880-1910) was a successful amateur piper, as was his brother Archibald, both winning many prizes at the London gatherings. Donald then turned professional and in 1902 he played at the Northern Meeting and was placed second in the Gold Medal. In 1903 […]