16 hours ago
Worlds tickets for 2022 on sale now!
2 days ago
RURA to play the Old Fruitmarket at Piping Live! 2022
3 days ago
Jim McGillivray shares a tune
4 days ago
European Pipe Band Championships hosted by Piping Inverness this weekend
4 days ago
11 year old Ella learning the pipes in Saudi 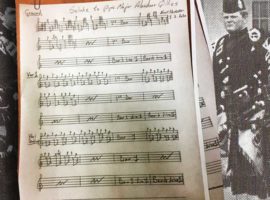 Double Gold Medallist, Niall Matheson has composed a piobaireachd in tribute to his former British Army comrade, the legendary Pipe Major Alasdair Gillies. The two served in The Queen’s Own Highlanders through the 1980s and 1990s, Niall for 12 years and Alasdair for 17. Alasdair joined as a junior soldier […]