12 hours ago
Piping’s thanks to Lady Dorothea Stewart Murray
1 day ago
Practice chanter reeds: cane v plastic
2 days ago
RSPBANI set to cancel most of band season
2 days ago
Reflections on the Northern Meeting, 1962
3 days ago
Another two online competitions (one solo, one for trios) / Memories of Evan Macrae

There has been a call in recent years for change in the long-standing arrangements in the big piobaireachd competitions; that the Piobaireachd Society should stop naming its own settings as the preferred ones, or stop setting the annual tunes at all, allowing the performers free choice in which tunes they play.

The first of these options was aired by Jim McGillivray a couple of years ago on ‘Pipers’ Persuasion‘, arguing that so many of the old authentic scores were available online, and judging benches were now so knowledgeable and techno-literate that they could summon up just about any version of a tune on their iPads and follow along. This would give pipers a much wider range of musical options, and more scope for interpretation given the expressive variety to be found in the older scores.

The “free choice of tune” suggestion also looks tempting at first sight. But a moment’s reflection tells us what would probably happen. Everybody would play Archibald Campbell, either from the Kilberry Book or the Piobaireachd Society’s Second Series which he largely edited. Everybody would play off a single score in exactly the same way – just as they do now.  In a bizarre twist of fate we would find ourselves back where we started a hundred years ago. The performance tradition has been corrupted and it is important for us to understand why and how we got here.

The Piobaireachd Society was originally founded to promote General Thomason’s great Ceol Mor edition which used an abbreviated system of notation to reproduce virtually the entire repertory in a single volume. Its compression meant that tunes could be distributed free to intending competitors, and the aristocrats and gentry who founded the Society could use their control of the benches at the greater events to set lesser-heard tunes from Thomason, thus enlarging what was heard in public.

In many ways it was a great idea. But it did not work out as the founders planned. Thomason’s system was abandoned; he was deposed as the Society’s president, and after a number of false starts, Archibald Campbell and his son James began their long reign as setters of the Society’s music. The Society scores were always issued in the name of the Music Committee, but Archibald Campbell worked alone and resisted all attempts to interfere. If he had edited honestly there might not be a problem, but he did his best to edit melody out of his scores. He thought that piobaireachd shouldn’t resemble normal music, and systematically, though silently, disrupted its rhythmical base and distorted its traditional idiom, claiming the results as the work of ancient masters. Pipers who thought they were playing Angus MacKay were actually playing Archibald Campbell. The trouble was, that they did not know they were doing it.

For many years the Piobaireachd Society decreed that only its scores, played as written, would be acceptable at the major events. They directly employed Willie Ross who ran the Army Pipe Majors’ class at Edinburgh Castle and insisted that he teach their scores, affecting generations of players, who of course went on in turn to teach their own many pupils. The Society hired well-known professionals to conduct classes in the winter months to teach the Society scores and the distorted time-values they contained. There was one shining exception – G. S. McLennan – who refused to forsake the traditional idiom and so was not appointed as a Society instructor. Hence, the Bobs of Balmoral, R. U. Brown and R. B. Nicol, were sent to John MacDonald of Inverness, although McLennan lived much nearer at hand in the city of Aberdeen. John MacDonald taught the Society scores and we know he did so because he wrote eventually that he was going to stop doing it, such was his disgust with the Kilberry Book of Ceol Mor, which he refused even to have in the house. The playing of MacDonald’s major pupils all showed features of Archibald Campbell’s scores which were not reflected in the earlier tradition.

Bob Nicol said that when he and Bob Brown were up at old Johnny’s for their annual stint, Johnny would play for them, and sometimes time things differently from the way he was teaching them, and when they pressed him for why, he would not answer. The Bobs  based their own teaching on the Piobaireachd Society volumes (with a few added refinements to soften their rhythmic and melodic awkwardness). If you enquired about any but the most commonplace tunes, out would come the Piobaireachd Society books, and an al fresco editing session would take place, in which they would tell you to make certain changes in your score: “lengthen this note; cut that; drop that cadence, and put one in here”. Some have thought that the Bobs preserved a magical strand of oral tradition, and to a limited extent they did; but the printed score was central to the process. No pupil could doubt that they were passing on what they themselves had been taught, and at its core was the ugly and unrhythmical settings of Archibald Campbell. You could see this in the ways they timed the double-echo movements. The Bobs’ introductory movement on A was, invariably, Campbell’s misunderstood and unidiomatic five-pulse version for which there was virtually no support in the earlier written and printed tradition. It was also true that their emendations nearly always produced a more pleasingly musical effect than simply playing the Campbell score as it stood.

Anyway, years passed; scarce old collections were reprinted; manuscript sources photocopied and made available locally, and after having eventually worked through a good many of the older manuscript and printed sources, l concluded that the tradition had not been passed on by John MacDonald as he had originally received it. The Bobs had been mis-taught; and so had I. I would have given much to avoid this conclusion, having the highest regard for Bob Nicol and Bob Brown, and long accepted their teaching as the real thing.

When I was young, everybody believed that the Piobaireachd Society volumes were summative so far as they went: the whole tradition was there in its preferred scores and the accompanying notes. It now turns out that we have been mistaken. Far from being an accurate account, the Piobaireachd Society’s Second Series wasn’t even truthful. But for many years there was no way to check this: very few pipers owned copies of the old books, MacDonald’s Ancient Martial Music and Angus MacKay’s Ancient Piobaireachd and so on. As for the manuscripts, they had mostly been bought up by the Piobaireachd Society or were secreted away in the vaults of the National Library of Scotland. The other public libraries of Scotland did not, in the main, hold bagpipe music at all, so there were few ways the ordinary player could check Archibald Campbell’s work against the written record even if they felt so disposed. In numerous letters to that great piping tribal-drum, the Oban Times, players would voice their disquiet as the successive volumes of the Campbell-edited Piobaireachd Society Second Series came out from 1925 onwards, but although they felt that things were going wrong it was very difficult to prove.

We know that stylistic change can happen very rapidly in music. The great conductor Sir Roger Norrington recently tracked the use of vibrato in concert string playing with its typical sobbing Palm Court style, all but universal by the 1930s, and assumed by most players to have been in place time out of mind. He discovered by checking the earliest recordings that it had been introduced within the last 30 years or so, and that the old written guides to playing way back into the 18th century identified vibrato as a vulgar effect to be used sparingly.

It seems obvious that something similar happened in piping. By the 1960s, when I first began to learn and to play ceòl mòr, the Piobaireachd Society style had come to sound ‘normal’. But it didn’t make any sense. The strongly rhythmical nature of the variations meant that Campbell had been forced to leave them largely alone; but in the grounds where there was much more scope for rubato he had coarsened and distorted the idiom to the extent that when one went to learn a tune from an experienced teacher, one had to be taught one’s way through the ground note by note, and with that negotiated, your teacher would say, “Well, there you go: it’s all plain sailing after that” and your normal musical sense could take over from that point.

Thoughtful people in the piping world have long recognised how important it is to reach out beyond the audience consisting chiefly of other pipers normally to be found at the big events and how difficult this has proved down the years. Archibald Campbell declared that the music was exotic and could only be appreciated by an expert few, and did his best to limit and narrow it accordingly. And indeed from the point of view of a general audience, the way ceòl mòr is currently played means you would have to be the most desperate musical patriot to persevere with it. And this alienation has spread even inside the performer community. I was once studying with a leading champion piper in Glasgow, a winner of several Clasps. My finger had closed up after a spell in the south, and I wanted him to overhaul my technique – which he did expertly. We confined ourselves wholly to the light music; piobaireachd was never mentioned from one visit to the next.  Then one day, out of the blue, he suddenly started talking about ceòl mòr. Referring to the kind of amateur “enthusiast” who would declare, “Oh, I do so love the pibroch”,  he said that in his opinion anybody who professed to actually like piobaireachd, was a “nutter” – his word. He is not be alone in this sentiment. After all, given the corrupted settings and the plodding note-for-note, safety-first way in which they are played, what person with serious musical tastes could feel honestly drawn to piobaireachd as publicly performed?

But that was then, and the internet has in the meantime swept that old world aside. Nearly all the old manuscripts are now freely available online, along with most of the important published collections. The piping world is no longer made up of a passive under-class and a tiny controlling élite with exclusive access to the sources. It is now possible for the thoughtful performer to attain to a knowledge unimaginable even a few years ago, and the pre-Kilberry scores, sweet and musical, and lovingly compiled by genuine masters are out there waiting to be played. So what are we waiting for?

• Dr William Donaldson worked for 25 years with the Open University and is currently a Lecturer at the Massachusetts Institute of Technology. He is the author of the best-selling book, The Highland Pipe and Scottish Society 1750-1950. A new edition of his book, Pipers, will be published next month.

* The views expressed in all blogs that appear on Bagpipe.News are not necessarily the views of the National Piping Centre. 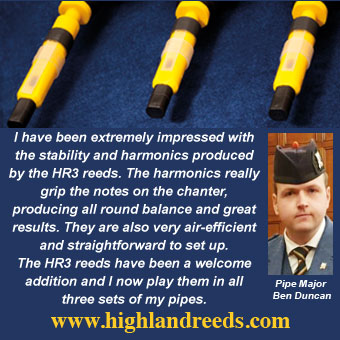