8 hours ago
Pipers’ Tryst Sessions and Celtic Connections brighten a Glasgow weekend
1 day ago
Richard Parkes pays tribute to Ian Duncan and his contribution to pipe bands
2 days ago
Playing the Highland pipes with other instruments – why B-flat and not A?
3 days ago
Piping results and photos from B.A.G winter competition
4 days ago
See Breabach tonight at CC23 and on USA tour starting Feb 2023 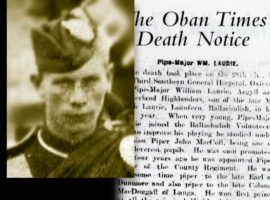 Tomorrow, Remembrance Sunday, millions of people around the world will commemorate the contribution of British and Commonwealth military and civilian servicemen and women in the two World Wars and later conflicts. At 11:00 thousands of pipers will participate in ceremonies at cenotaphs and churches and elsewhere. During the First World […]