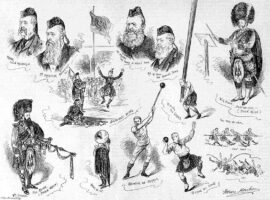 1884/85 BY JEANNIE CAMPBELL MBE In March 1884 there was an announcement that the Scottish Gathering would change dates that year: “The annual Scottish Gathering, the proceeds of which are given to the Scottish charities in London, has been fixed to take place on Saturday 21st June at Stamford Bridge […]