I stood on the railway platform waiting for the train. My belly rumbled like a lion’s den. It was the postman’s fault for making me miss breakfast. He was early this morning. Despite this we had our usual intense and inspirational chat. We laughed, we argued. We wept like babies. We retreated and rebuilt.

Much to my consternation, there was no catering service on the train bound for Glasgow. Sustenance would have to wait. In the meantime, it would be the fine Perthshire scenery I would have to dine on. The first rule of writing, wrote A. A. Gill, is to never try to write whilst looking at a view that competes with the one in your head. My usual off peak – oft pique more like – train journey from Perthshire to Glasgow certainly passes some beautiful Perthshire scenery – Gleneagles (from the Gaelic word for church, eaglais; nothing to do with eagles), Sheriffmuir, the banks of Allan Water, Cromlix House, immortalised in J. B. Robertson’s march, Mrs Terence Eden’s Welcome To Cromlix – and the panorama stifles ideas. Not a lot of work is ever accomplished by me when travelling by train.

Soon, though, we pulled slowly into Queen Street station, Glasgow’s northern railway terminus. By now I was ravenous. I could, as they don’t say in these parts, gormandise on a furfuraceous canine.

I sauntered gingerly, nay gallusly (well, it is Glasgow) up Buchanan Street and turned into Hope Street, resisting a Chic Murray joke as I went. Onwards I bounded, on past the Royal Conservatoire of Scotland and past the site where the workshops of both Donald MacPhee and R. G. Lawrie used to be. This historic part of the city centre, Cowcaddens, has been transformed since those days. It’s almost unrecognisable from even 30 years go although the Theatre Royal (which opened in 1867) remains.

The Pipers’ Tryst Restaurant and Hotel came into view. Most people will be aware of this establishment. It is housed within The National Piping Centre, the solid Old Cowcaddens Church building built in 1872. This is the top of Hope Street, which is appropriately named as I had high hopes of eating some tasty food. As it turned out, the meal was all I could have hoped for.

I bounded up the steps just as Roddy MacLeod himself was passing by. He greeted me at the glass-fronted entrance. “Can’t stop, Roddy,” I declared. I’m Hank Marvin’”.

On entering the Pipers’ Tryst, I was impressed by the surroundings: a bit of tartan, a well stocked bar (with Scottish whiskies and gin plus Innis & Gunn beer on tap) and tasteful folk music emanating from the PA system at a pleasing volume. I scanned the room. Black and white photographs of famous pipers stared at me from all angles: John MacColl, Donald Cameron, John Wilson, Willie Ross, Angus MacPherson … And there, in colour, in front of me, the quintessential piper, Pipe Major Angus MacDonald. A couple of elderly ladies-who-do-lunch sat beneath him. Over in a corner, beneath D. C. Mather, sat Wilson Brown, NPC Instructor and owner of one of the most winsome smiles since Paul Newman handed his in. Dan Nevans, another NPC Instructor, entered and noticed Wilson. He nodded. A sombre nod, the nod Napoleon might have given if somebody had met him in 1812 and said, “So you are back from Moscow, eh?”

I was greeted by a sonsie lass. Well, she said she was from Ayrshire where it is a well-known fact all the lassies are, as the Bard said, sonsie. She beckoned me to a table and presented me with a menu. It was the new autumn ‘Scottish Market’ menu, which was launched recently. As the name implies, all the produce is sourced locally from within Scotland. I scanned it and salivated. Eddie Shaw, the head chef, has been here for 20 years but entered his first competition only this year … and won. On the menu his dishes are stated simply. It became apparent later that Eddie, pictured left, lets his cooking speak for itself. This menu complements the A La Carte offering and from the three choices on offer for each course, I ordered the Thyme Crumbled Camembert Cheese followed by the Lamb Rump.

Ideally, luncheon should be spent with good company and a bottle of agreeable wine. Alas, today I was on my Lord Todd and, given I was in town to attend a meeting, I supped a frothy cappuccino followed by a cold half-pint of Innis & Gunn.

I didn’t have to wait long for my starter. It arrived warm and with an air of insouciance. The cheese was deep and divine, unctuous with a crust that was a negligee, not a shroud, for the cheese. It served to ready me for my main course.

There is, sometimes, confusion about spring lamb. It is at its best eaten in autumn as it is a lamb that was born in the spring and was between three and five months old when slaughtered, so is at its best when eaten in the autumn. It should be rosy-coloured, succulent, and with a subtle, almost sweet taste, which this most certainly was. It came with dauphinoise potatoes and mint gravy. The potatoes were sublime and cooked exactly the way they should be: without cheese (don’t you hate it when dauphinoise potatoes have been gratinated?). The whole dish was hot, generous and uncomplicated as a hug. Gorgeous.

I hadn’t intended on having a dessert today – two courses are usually enough for me – but Eddie’s menu features temptations such as homemade Sticky Toffee Pudding, Chocolate Salted Caramel Mousse and Mull of Kintyre Cheddar Cheese Plate. I chose the Sticky Toffee Pudding and was glad I did. It was a wholly unexpected dish: cleverly crafted on the premises and made with finesse and an élan that actually complemented the surroundings but also elevated them. It was elemental and exotic. If it were a novel is would be Alasdair Gray’s Lanark. If it were a pipe tune it would be Susan MacLeod. Or Inveraray Castle.

Two courses came in at £15.95; three for £17.95. You won’t find such an outstanding lunch anywhere else in the city centre at those prices. The food here will satisfy the burger fiend or the trencherman in equal measure.

I was jolted from my postprandial torpor with the sudden realisation I had a meeting to attend. Suffice to say that if you’re hungry and in the city centre then birl – sorry, couldn’t resist it – up to the top of Hope Street. The Pipers’ Tryst is a singularly fine place to enjoy a meal or a drink, whether you are a piper or not.

• You can book a table at the Pipers’ Tryst Restaurant online at www.thepipingcentre.co.uk/eat or call 0141 353 5551. They have tantalising menus for breakfast, lunch and dinner, as well as a great range of events coming up – including a St. Andrew’s Night Whisky Dinner. 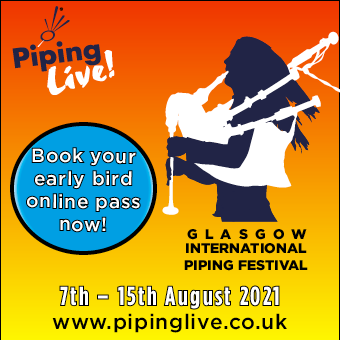